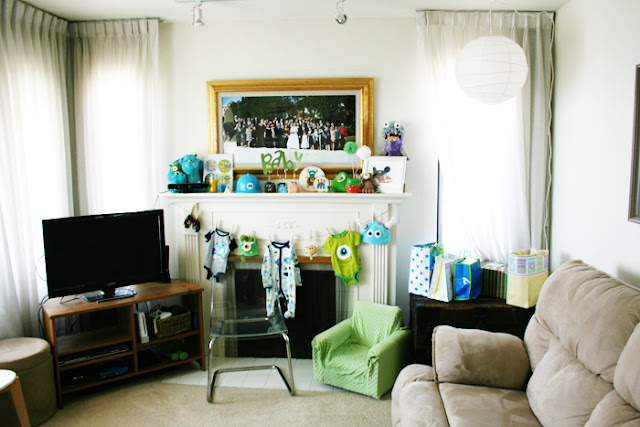 Last week, I threw my little sister a baby shower. I wanted the shower to have a Disney theme (of course!), but she’s having a baby boy and most of the Disney-themed baby showers I found were girly, Cinderella affairs. I brainstormed with my other sister and we ended up going with Monsters Inc. as the shower theme because my sister loves that movie. I was a little lost at first, trying to figure out how to make the monster thing and the baby thing come together, but after a little planning and some help from a few fabulous Etsy sellers, the shower ended up being the cutest ever. Who knew monsters were secretly adorable?
Besides the shower theme, I faced an interesting challenge with this party. If you guys remember Eva’s Princess and the Frog first birthday party, you’ll know that I like to do big, over-the-top parties with decorations from floor to ceiling. However, for this baby shower, the guest list consisted of people who work with my sister and Kyle (they work in the same office). Since these people would be coming from work, we knew they’d probably want to just pop in for a bite before heading home. So, a huge party seemed inappropriate. 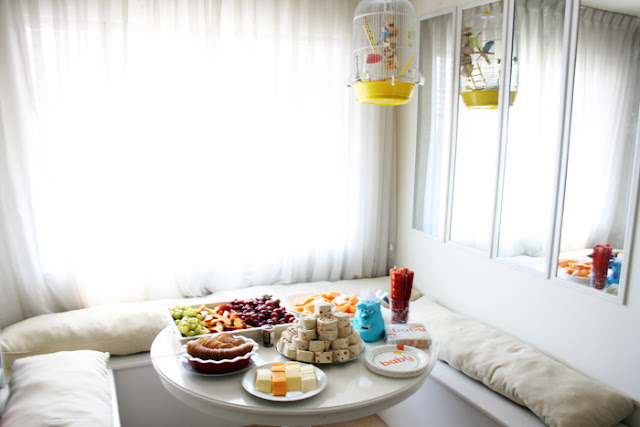 At first, I thought I was going to have to scrap the themed ideas altogether, but ultimately I just scaled back a bit on the decor, made the food really casual, and ended up creating an event that had a theme but wasn’t too overwhelming. Between this and the over-the-top parties, I think I might even like this kind of celebration a little bit more…

Since it was an evening party that wasn’t serving dinner, most of the food was light. We did fruit, crackers, a cheese plate, and turkey roll-up sandwiches (all from Costco). I also found some cute little fruit sodas in bright colors that matched the monster theme, so we put those on ice and served ice water as well. The total cost of the food was less than $50 and the Morgan family was happy to snack on party leftovers for a few days after the shower. 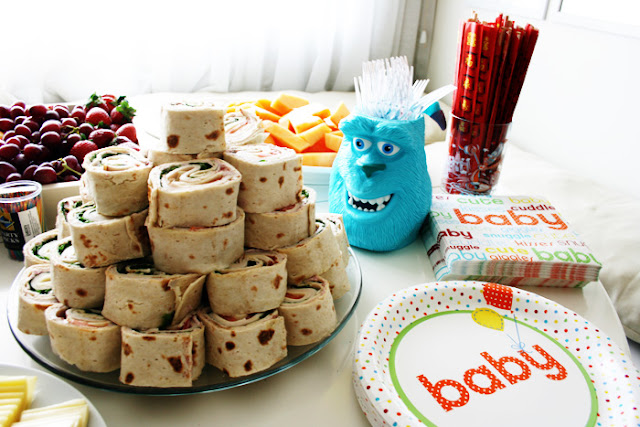 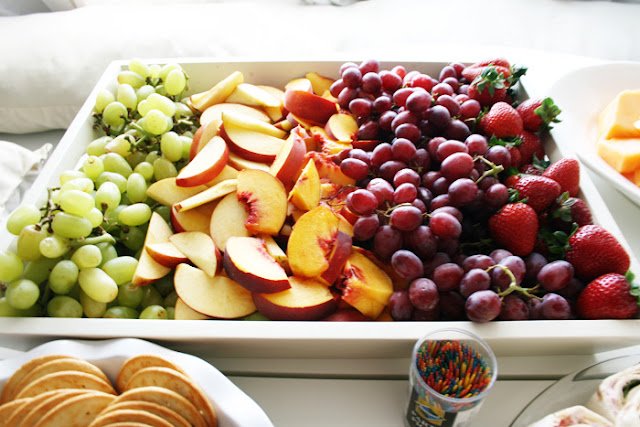 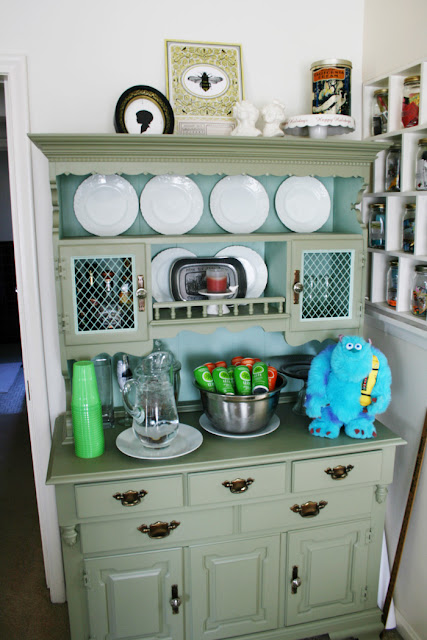 To set the mood, we played some Monsters Inc. music in the background and scattered some of our Monsters Inc collectibles around our house. It was surprising, actually, to see how much Monsters Inc stuff we have. It’s one of my favorite movies, so our collection was a little out of control. In fact, after the party we ended up sending a bunch of the stuffed animals to a new home because no house needs four Sulleys!

I did want to make sure that it still looked like a baby shower (and not a Disney/Pixar birthday party), so I decided to mix decor with our baby gift for my sister and picked up some Monsters Inc. onesies from Disney Baby. Eva had one of these and they’re just amazing…super soft and they have double rows of snaps so they grow with the kid. They make all sorts of Monsters Inc prints, so we bought them all and also grabbed a pair of Monsters Inc footie pajamas (from Disney Baby as well). I have to admit that I was a bit selfish when picking out these presents, because if we have a boy in the future we get all the hand-me-downs!

To display the onesies, I strung blue yarn in a couple of places in the living room and pinned them up with cheap wooden clothespins. I was originally going to paint the clothespins, but I ran out of time and honestly it probably wouldn’t have made that much of a difference. 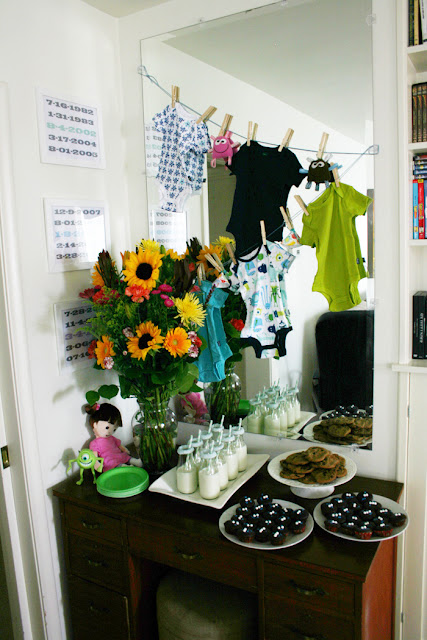 The one semi-creative thing that I did food-wise was for the dessert table. We did fresh chocolate chip cookies (freezer dough from Costco) and mini chocolate cupcakes, so I wanted to provide milk for anyone who wanted it. I used the same recycled Starbucks Frapuccino bottles that we had for Eva’s birthday party, since they’re cute and they look great with paper straws. To theme it up, I dipped the rims of the milk bottles in white candy melts and added baby blue sugar. I had seen a similar project on Pinterest with milk chocolate and multi-colored sprinkles, but when I did it the bottles sort of looked like they had fur on them. Oh well…at least it worked with the Monsters Inc theme and the candy melt washed right off after the party. 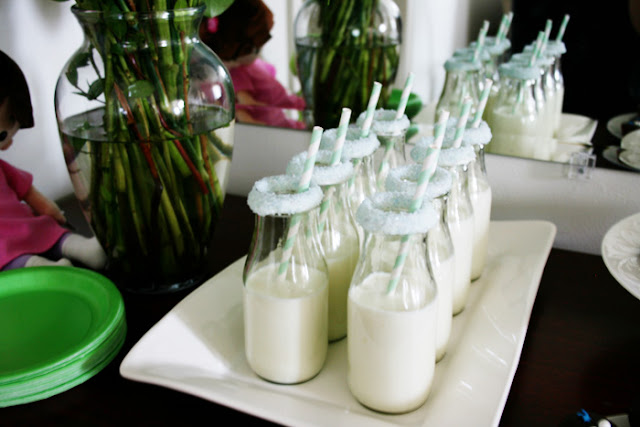 In addition to the Disney Baby onesies, I scattered a few gifts from Etsy sellers here and there. I found a ton of monster-themed baby goods on Etsy and was happy to receive a lovely selection of donations from the shower. I’ll be covering more from these sellers this week so you can look inside their shops, but here’s a peek at what they sent: 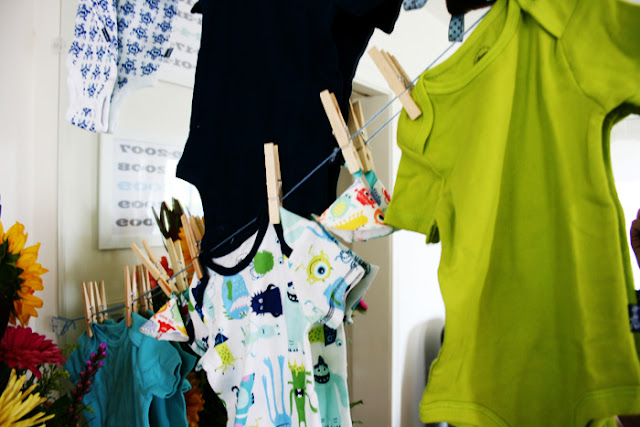 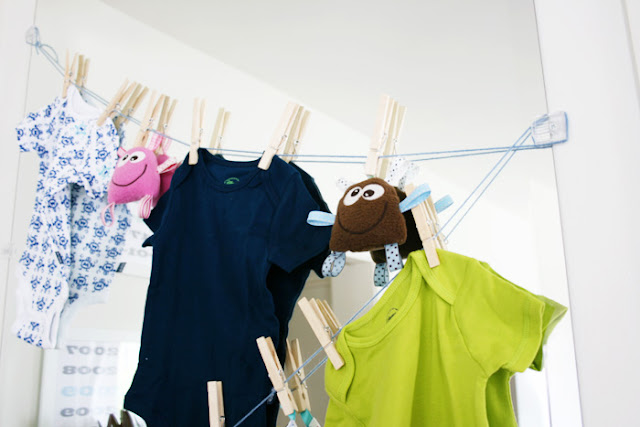 Onesies by Disney Baby; Monster Rattles by Birdie and Dot on Etsy 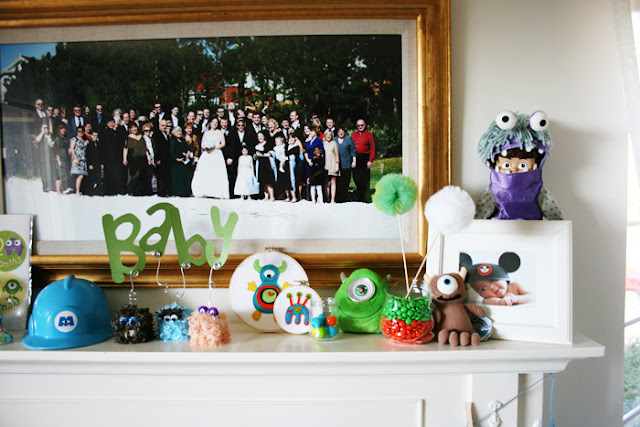 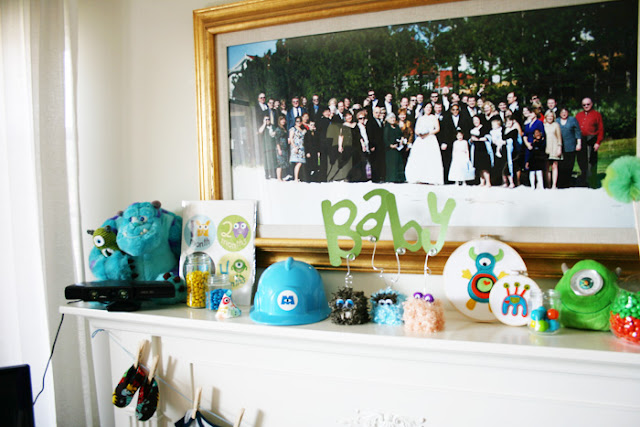 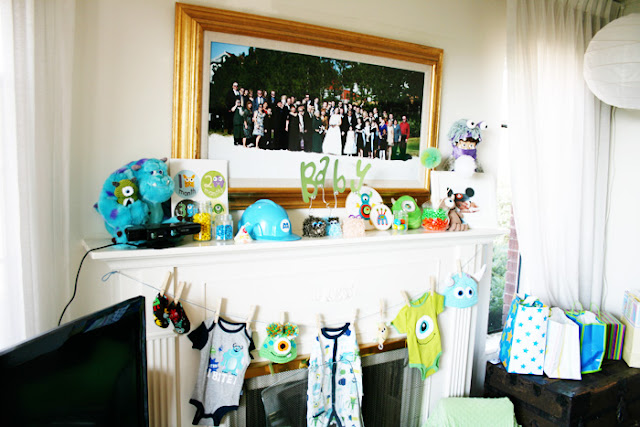 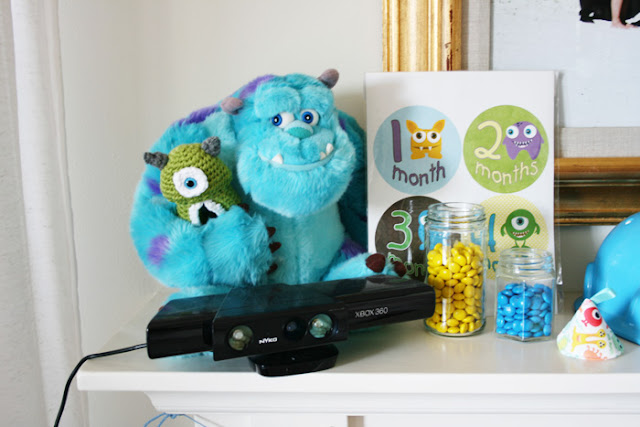 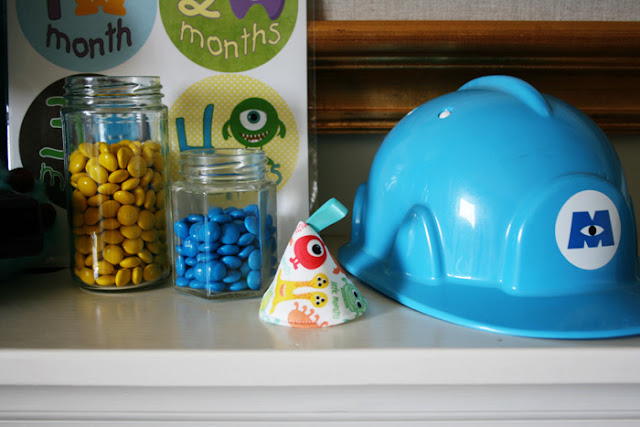 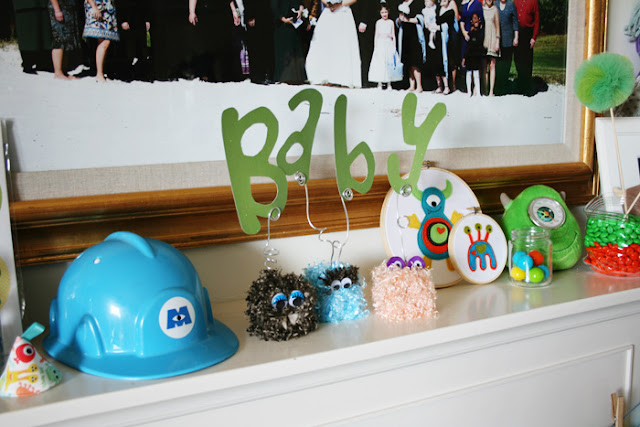 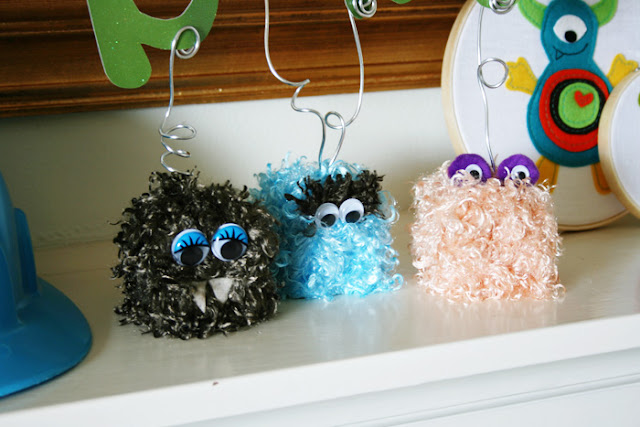 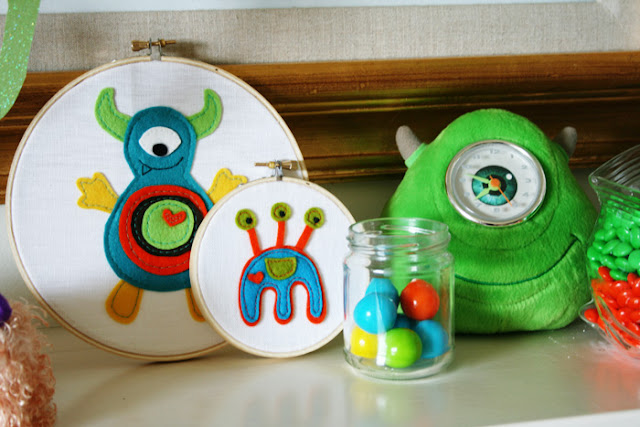 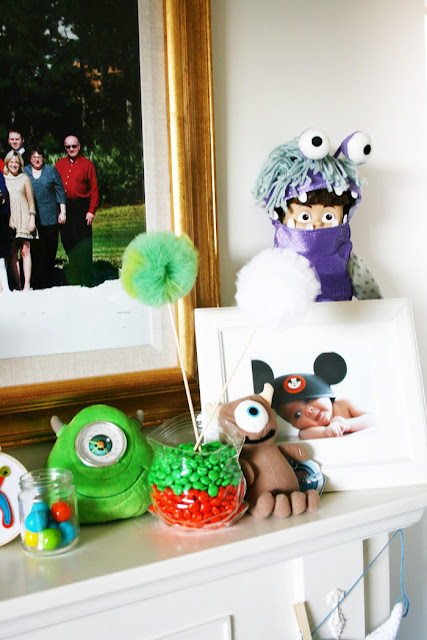 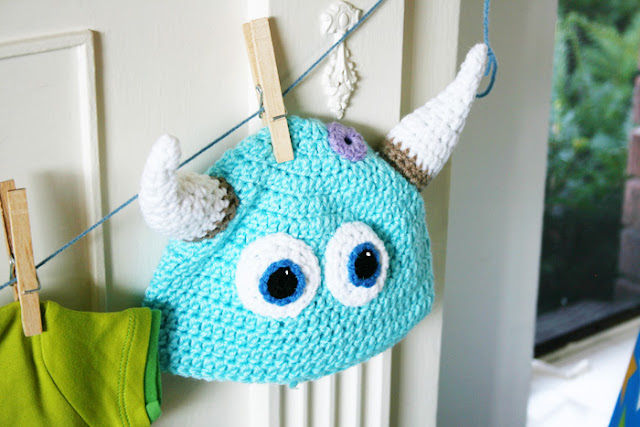 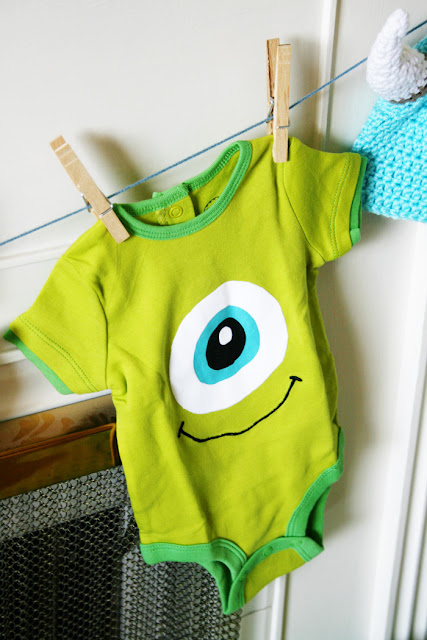 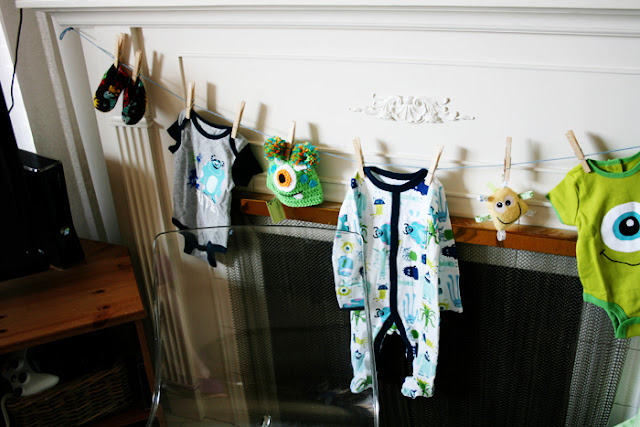 Onesies and pajamas by Disney Baby; Monster Rattle by Birdie and Dot on Etsy; Newborn Monster Hat by JessikiReeve Crochet on Etsy; Monster Baby Booties by Turt and Elephant on Etsy 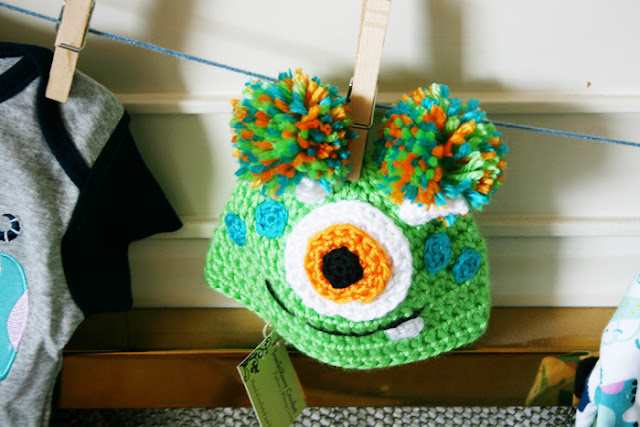 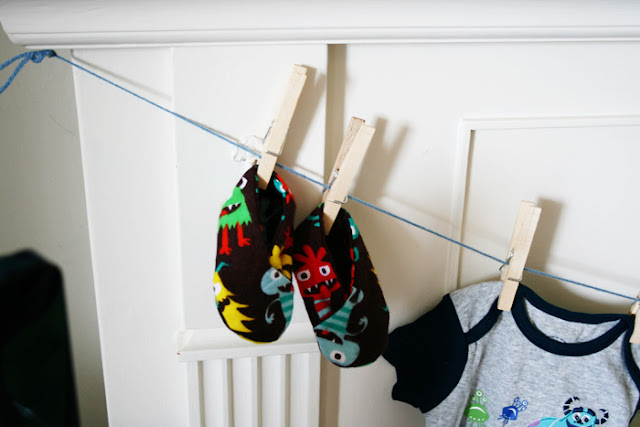 Monster Baby Booties by Turt and Elephant on Etsy

Somehow, we forgot to take any photos during the shower, but it was a really nice time. Kyle and my sister work with some really nice people and they had a good time relaxing and talking baby over the warm cookies and milk.  I know that some people find party planning stressful, but I think it’s so much fun to open your house for a couple of hours and create a nice time for people. This party, in particular, was quite a breeze. Costco provided most of the food (almost none of which required prep) and I only spent about an hour setting out decorations and getting the party area together. I really think I’m going to go “themed/casual” from now on – so much more relaxed!

Love this party? Pin this collage to save it for later! 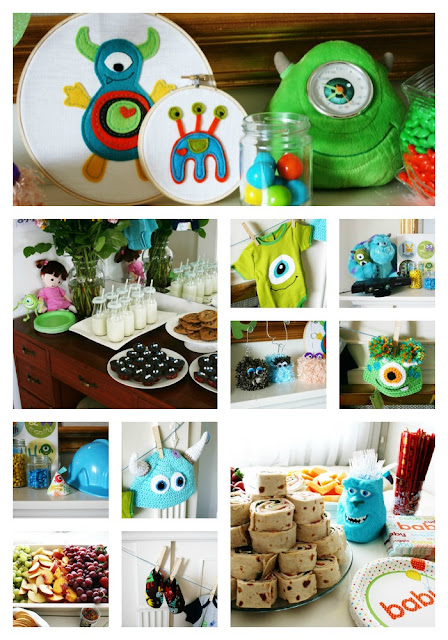 This site uses Akismet to reduce spam. Learn how your comment data is processed.

I raise kids and write things.

Ever Clever Mom on Amazon

Ever Clever Mom copyright 2018. All rights reserved. You may not take any images or content from this site without written permission.

Ever Clever Mom is a participant in the Amazon Services LLC Associates Program, an affiliate advertising program designed to provide a means for sites to earn advertising fees by advertising and linking to Amazon.com.

I also use other affiliate links sometimes when linking to other websites. Although this means I earn a commission if a reader makes a purchase, understand that I believe in and stand behind all products or services I promote.