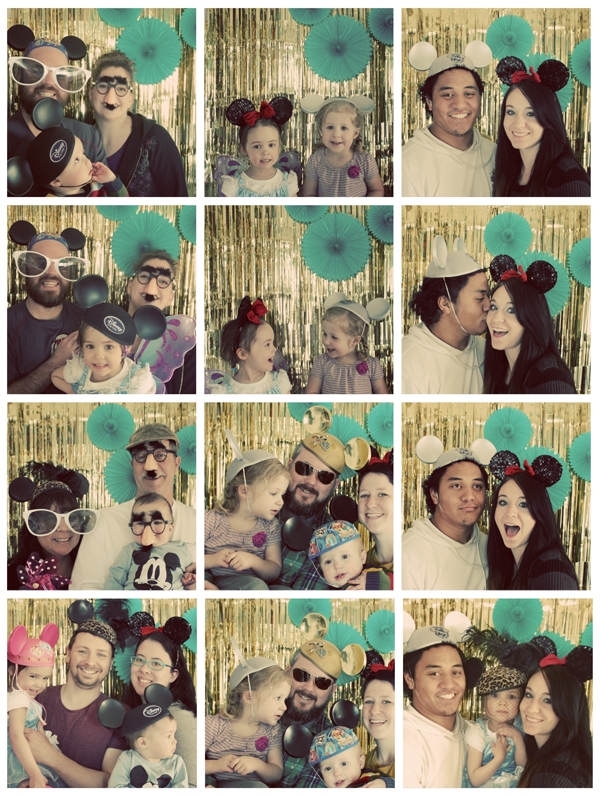 One of the activities we had at our combo #DisneySide/Eva’s 3rd Birthday party last weekend was a Disney photo booth. It was easy to set up and the photos ended up being both a lot of fun AND a nice keepsake for people to leave the party with.

To set it up, I bought some decorations at the party store. A shimmery gold fringe table garland turned into a photo background when I cut it to fit the width of a door frame and then layered it. I used one $8 package and you could actually sort of see through the background when you were really looking at it, so you might want to double up if you do this at home. Since it looked great in the photos, I wasn’t worried about it. I also purchased some hanging fan decorations in two sizes and taped them to the fringe background so they became a hidden Mickey. 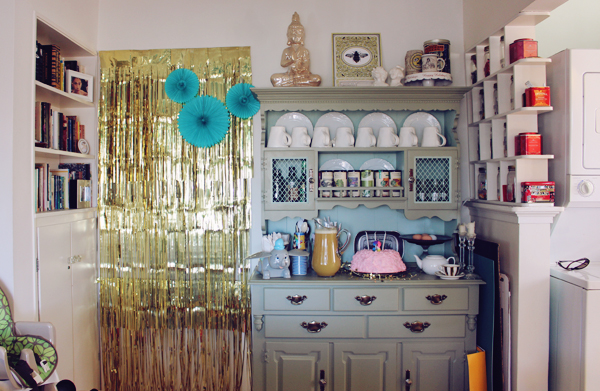 I thought about doing paper props for our photo booth, since I’ve seen a bunch of cute ones on Etsy, but we have such a huge Disney ear hat collection I decided to just put those out in a canvas bucket with a few extra props. I think most people just grabbed the ones on the top since the same ears were used a lot and we had some (like our Mickey top hat groom ears) that didn’t get used, so if we had more space I’d probably spread everything out on a table next time. 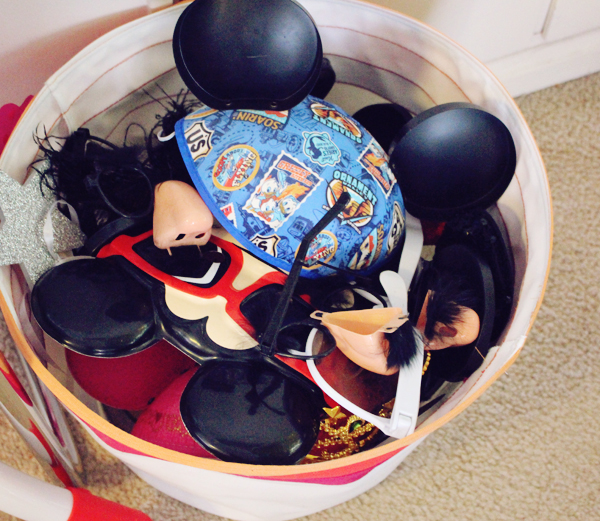 I took the photos with my cell phone and my big camera and then cropped them to square size on the computer. Don’t worry about trying to crop it with your camera since it will make you crazy, but be sure that your subjects are squished together in front of the backdrop so you can crop the photos easily when you’re done.

To get the photo booth look, I added a vintage filter to the photos and then popped them into a 3 x 4 template I had set up in Photoshop. I was able to print the photos out on the spot by sending them wirelessly to my new HP Envy 5530 (easiest printer to use ever!) so my guests could take their favorites home with them. Eva has been particularly thrilled…I don’t think she’s ever done a “real” photo booth before so the experience was all new to her. 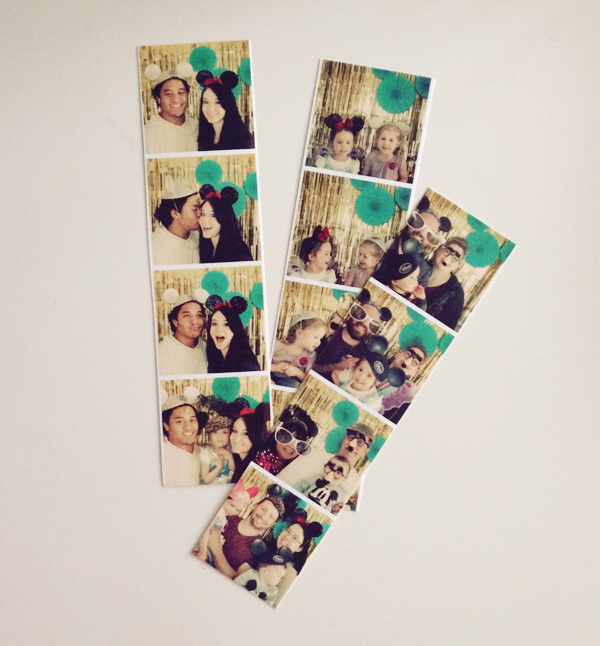 Any ideas on other Disney props people can use? Backgrounds?

Disclaimer: I was selected to host a Disney Side at Home party and given party supplies from Disney Parks and Mom Select. I received my HP Envy 5530 printer for free as part of a blogger promotion through HP. The ideas and opinions above are my own.

Zootopia: My Reactions and an Interview with the Directors

This site uses Akismet to reduce spam. Learn how your comment data is processed.

I raise kids and write things.

Ever Clever Mom on Amazon

Ever Clever Mom copyright 2018. All rights reserved. You may not take any images or content from this site without written permission.

Ever Clever Mom is a participant in the Amazon Services LLC Associates Program, an affiliate advertising program designed to provide a means for sites to earn advertising fees by advertising and linking to Amazon.com.

I also use other affiliate links sometimes when linking to other websites. Although this means I earn a commission if a reader makes a purchase, understand that I believe in and stand behind all products or services I promote.